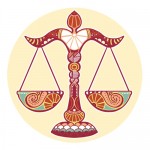 Those born under the sign of Libra, the Scales (September 24 – October 23), have a wonderful balance of traits. They’re considered to be diplomatic and urbane, romantic and charming, idealistic and peaceable. Even their darker characteristics aren’t so terrible. They can be flirtatious, easily influenced and indecisive. Curiously, Libra is the only sign of the Zodiac represented by an inanimate object, the Scales. Every other sign is represented by an animal or sea creature or person.

Libra is the very first sign of the astrologers’ Great Year, and occurred between 15,000 and 13,000 BCE. It marked the dawn of Man and his expression of his condition beyond basic survival mechanisms. This is the approximate date of the monumental Lascaux cave paintings. It also marks the appearance of humans in the Americas, crossing from the Bering Strait into North America.

Like the scales of justice that represented Libra, this sun sign makes good lawyers and judges. They’re able to stand back and look at situations with a critical, objective eye. They’re among the most civilized of all the signs, with elegance and culture among their traits.

As a partner, Libras are willing to bend over backwards to resolve an issue amicably. The best match for a Libra is a Gemini; they’re least compatible with Capricorns because Capricorns like a little more excitement in life, while Libras prefer a more laid-back existence. You won’t find Libra sitting out all the dances that’s for sure! Very easy going and likeable, you will find Libra’s company a pleasure to enjoy. Even though they are outgoing, they are also surprisingly peaceful and calm of spirit.

Famous Librans include John Lennon and Jenny Lind, the famous Swedish singer. Doris Lessing, Luciano Pavarotti, Oscar Wilde and Johnny Carson are just a few of the Librans who have enriched our lives in the arts.