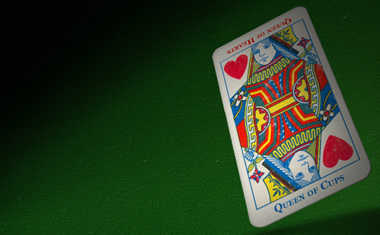 Most people who play cards don’t realize that our modern deck of 52 cards is derived from Tarot cards. In fact, the four suits correspond directly with the suits in a Tarot deck. Here is how they match up:

Traditional Tarot decks have 22 “trump” cards, called the Major Arcana, along with 56 “suit” cards called the Minor Arcana. The Major Arcana Tarot cards include powerful archetypes like The Sun, The Moon, The World, The Lovers, The Magician, etc. The suit cards correspond closely to the 52 cards in a playing card deck, except in Tarot we have not only Queen and King face cards, we have Page and Knight cards for each suit, which were combined into the single Jack card as playing cards developed over time.

Playing cards were once used for fortune-telling

Tarot shows up first in Italy and France in the 14th and 15th centuries, possibly having traveled there from the Middle East. In the early days, both types of cards — Tarot cards and playing cards — were used openly to play games and for general entertainment, but both were also adapted and used for divination or fortune-telling purposes, mostly in secret. Go ahead and give Tarot a try with a Celtic Cross Tarot reading now!

Some historians suggest that all card “games” were originally developed in part as a way to hide (from the medieval Church) the more serious application of the cards and symbols. The Church condemned divination and gambling both (in spite of the fact that divination is depicted favorably more often than not in the bible).

Tarot has been interpreted creatively by artists and sages through the ages, whereas the playing card deck has stayed pretty much the same. Tarot art is a rich and beautiful reflection of history, and it traces the evolution of these universal symbols in different periods and cultures, right up to modern times.

Consulting the Tarot cards is entertaining, even as we use it for advice or to decipher the deeper meaning of circumstances and events in our lives. In fact, you can approach Tarot like a game of spiritual solitaire!

Tarot.com offers authentic self-service Tarot experiences for you to try online. Shuffle and pick your cards, just as you would with a physical Tarot deck. Give it a try … you’ll be amazed at the insights and advice you’ll receive!