April 30th, 2014 | Posted by horoscopesign in Astrology | People - (Comments Off on Claudius Ptolemy) 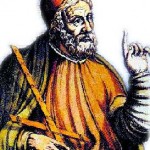 The astronomer Claudius Ptolemy lived from approximately 100-170 CE. Very little is known of him, including where he was born. Claudius means citizen of Rome, while Ptolemy means resident of Egypt. Some sources indicate that he was a citizen of Rome, others that he lived in Alexandria, Egypt.

He was also a mathematician, geographer and astrologer. In a way, he was to his era what Leonardo da Vinci was to the Renaissance. While many of Claudius Ptolemy’s work has been refuted, his treatises on astronomy, astrology, geography and music were the foundations from which subsequent scientists built their theories.

The Ptolemaic system of the universe became the dominant cosmological model for centuries thereafter, and was not displaced until the seventeenth century by Kepler and Copernicus.
Modern astrologers consider Ptolemy as the author of one of the oldest complete manuals of astrology, – the Tetrabiblos (Greek) meaning Four Books. Although we know Ptolemy did not invent his methods of astrology we recognize his contribution as being one of orchestrating the mass of Eastern star lore into an organized and reasoned exposition. The Tetrabiblos offered a detailed explanation of the philosophical framework of astrology, enabling its practitioners to answer critics on scientific as well as religious grounds.

As a leading intellectual of his day, Ptolemy’s patronage and approval of astrology added to its academic respectability. By preserving its credibility as a science as well as an art, he safeguarded its practice during the medieval period when many other occult studies were persecuted on religious grounds. He spoke of astrology with authority and lucidity, establishing the Tetrabiblos as the definitive reference for astrological students. It was used extensively by Arabic scholars, who regarded Ptolemy as the final word on the subject, and later by European ones when it was translated back into Latin in the 12th century.