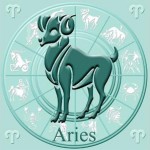 Aries the Ram (March 21 to April 20) is called the first sign of the Zodiac. We think of the beginning of the year as January, because that’s the start of the new calendar year. But this is the Zodiac year, remember, and is governed by matters more celestial than mundane! March 21 is the Spring equinox, which signifies the beginning of the Zodiac year. And when you think about it, this makes sense. Spring is the time of renewal and rebirth.

If you are born under this sign, you can tend to have the same traits as a young ram. Enthusiastic, adventurous, forthright and energetic. You’re courageous and confident. You could be a little impulsive though, right. Maybe something of a daredevil. Where the world be though, without daredevils, willing to strike out and do something completely different. Leonardo da Vinci is one of the most famous Aries ever born. Think of some other famous Arians, such as Thomas Jefferson, Booker T. Washington, Francis Ford Coppola, Jane Goodall and Marlon Brando. None of them afraid to break new ground; all of them changed the world or their chosen fields in some way.
People born under the Aries sign are passionate lovers and intense friends. They risk driving people away with their intensity and need partners that can match them without fueling the fire and creating explosive situations.

Arians make good doctors, athletes and explorers. This isn’t to say that people born under the sign of the Ram are all action, though. They have a softer, lamb-like side as well and if you’re an Aries, make sure you draw on this side of yourself as well when dealing with other people. You may have difficulty in certain jobs, because you’re an idea person and the person to get things started rather than finish them up. Surround yourself with people who can supplement these traits and you’re sure to be a success.