April 24th, 2014 | Posted by horoscopesign in Astrology | Signs - (Comments Off on Information On Capricorn Sun Sign) 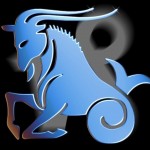 If you are a Capricorn (December 22 to January 20), you are a personality to be reckoned with, but in a quiet, subtle way. These are people who will achieve whatever goal they set for themselves. They have the grit and determination to see out a project or an objective, no matter how long it takes. They are surprisingly witty, when they allow themselves to be, although they’re not the fiery, flashy kind. A Capricorn will always be on time, will always have positions of responsibility. They make good psychologists because of their ability to listen to short-tempered people or people on a rant. They have an ability to stay calm and reasoned in a disagreement or conflict, even though the other side may be more passionate.

They are deep thinkers who have good memories and a never-ending intellectual curiosity.  In their relationships, they can have a tendency towards unhappiness. Capricorns set very high standards for themselves, and can be easily disappointed if others don’t set equally high standards.
Professionally, they are strongly attracted to music, although their logical side also makes them excellent bankers. Some famous Capricorns include Anwar Sadat and Martin Luther King. Paul Cezanne and Henri Matisse were also Capricorns. Other famous Capricorns include Richard Nixon, Simone de Beauvoir and Edgar Allen Poe.